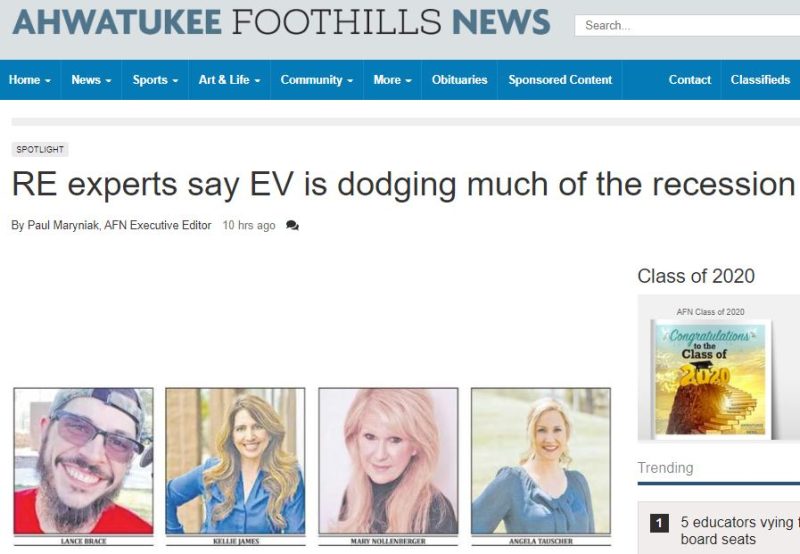 During a discussion of the housing market and issues related to the pandemic, five real estate experts and the AFN began talking about the overall economy in Ahwatukee and the East Valley.

Their assessment of the housing market appears in today’s real estate section.\

Here’s what else was discussed.

How do you see the market for commercial and office space in this region?

Mary Nollenberger: The East Valley for me is home, where I live and I do my work. The vacancy rate is just under 7 percent in those areas as opposed to other areas of Metro Phoenix that are in the 20 percent and 30 percent vacancy rates.  Chandler and Gilbert are rising communities that are experiencing a ton of influx from California businesses.

For example, State Farm in Chandler – they are recruiting from 42 markets to bring employees just into that tech corridor in Chandler. Chandler and Gilbert are experiencing growth at a rate that another municipality can’t compare to.”

Nollenberger: A lot of the tech business placement and then housing follows those jobs. The Tempe Town Lake has huge employment expansion; Chandler has huge expansion. Chandler’s population is slightly larger than Gilbert’s but Gilbert has been voted one of the nation’s friendliest cities to move to.

There’s so much positive press for the East Valley and there are, you know, there’s housing that follows job.

When  people from out-of-state talk about what’s happening in Arizona specific to COVID, our East Valley cities are really in a different category because of the bulk of business and people wanting to escape the California tax situation.

There’s incredible commercial tech and new jobs in the Apple Command Center and Far East Mesa in the Gateway District There’s tons of jobs. And then, Eastmark has provided a great option for affordable housing but in a community that is so vibrant.

Queen Creek used to be the option for people that didn’t mind driving as far but wanted more affordable housing now every restaurant, every commercial retailer that wasn’t there before is there now. So you’ve got dining options, you’ve got shopping options. You’ve got entertainment options.

The  entire East Valley is just vibrant in a different way than any other area.

Tauscher: I agree with Mary completely. I live in Queen Creek myself and have been there for the last 12 years and we used to be basically the redheaded stepchild and now it’s the place to be.

I mean we have everything – from our own Harkins now. They’re building a Fat Cats. Trader Joe’s is going in the same parking lot right next to Target and Barrio Queen.

I think the thing about the Queen Creek-Mesa corridor is that there’s so much newness. It just feels fresh. It’s close to an airport for a lot of people that don’t mind going into one of the smaller airports. The 202 is right there. There’s just a lot of navigational options there. You go to Maricopa, which is also growing at a rapid rate but you’re trapped – one way in and one way out.

Nollenberger: From the commercial landscape view, we’ve had a lot of conversations about the future of retail jobs. And of course, it used to be recession-proof, and then it was internet proof and now it’s COVID-proof.

We’re looking at how Target spends. Target spends millions implementing inventory and digital control systems and put them in place before they needed them so that people could order online and could choose either in-store pick-up or delivery.

Walmart jumped on that strategy with pickup and delivery options. Those companies are going to be rewarded for having that technology in place. So we have to take a look at the grocers who have not implemented those strategies and how that might in long-term effect their viability.

We’re looking at retailers and how they are changing strategies to not only survive but be competitive in the future with all those factors affecting their future.

Would you say that restaurants and bars have probably taken a greater hit than the small retail businesses?

Nollenberger: Absolutely. I think that restaurants that are following the protocol and requiring masks and distancing, I look at numbers occupancy numbers with clients of mine.

Lease rate occupancy cost can’t be more than 8 percent and now with the decrease in their volume and having to comply with distancing and close every other table, they’re having to look at strategies to increase their monthly cash flow opportunities, and how are we going to navigate this.

When you look at that business owner that is complying and then a bar that has no social distancing protocol going on, a survivability factor can’t be equal when the conditions are so different.”

How about office space? How will social distancing and the economy impact large buildings and complexes?

With the increase in remote working, will companies decide “we don’t have to pay all this rent”? Do you see a change in the demand for office space in the region?

Nollenberger: Buildings are pretty committed before they ever go vertical. There’s very little office space that’s built speculatively. There are a lot of people that want to reach out to their office setting…There are people who can’t wait for that – for office to be office and home to be home.

What is the state of strip malls in your experience?

Nollenberger: With every crisis comes an opportunity. There are a number of investors that thrive in a down market and that’s where all of their purchases occurred and they are not in their most driven mode when the market is where it’s been with contraction.

There was a time when being a grocery-anchored or big box-anchored was just preferential and honestly now for many investors, part of being internet-proof is having smaller spaces and not about the anchor and junior-anchor space being vacant. We just sold an unanchored Scottsdale site. It was under contract within two weeks of our listing and it closed 30 days early.

I was on a conference call with an investor yesterday who said, “When I saw this post card and that this property was sold, I realized that I missed this opportunity.”

New home construction: I’ve read that that’s not keeping up with demand. Is that still going to pose a struggle for people looking to buy a home?

Tauscher: We just put  two different clients in a new build in a Fulton Queen Creek. The sales guys were telling me they’d been open like six weeks and they’d already sold a hundred homes. We’re seeing the same thing everywhere with the builds. It is unbelievable… If they start out with five lots available, they’re probably not going to have five lots available by 3 in the afternoon. It truly is a problem.

So they’ll just go take a lunch hour and they just want to go see a model because it’s fun and they literally can make a field trip of it… They go in there thinking ‘I’m not going to do a new build’ and they fall in love with the staging and the next thing you know, they’re signing a contract and they’re buying a new-build.

Now there’s that weird timing issue where we are having a lot of people needing short-term rentals because the builder wants that house sold within the next week or two of going under contract and the home’s not going to be ready for six or seven months.

There’s not a lot of great viable options for people to go to so there’s been that a disconnect for short term rental situation.

So it seems from both the commercial and the housing side that the East Valley region is a little bit better positioned even during this pandemic than a good bit of the country. Is that safe to say?

James: Absolutely, I can work 24 hours a day.

Brace: What I’m seeing a lot is increased demand for four-bedroom houses in a rental, whereas before it was three bedrooms… I’m having people calling me asking if they can install secure phone lines and things like that so they can take credit card payments.

I’m really seeing that across the board and I think that moving forward, we’re going to see increased demand for bigger houses in rentals because of that: people needing office space.

Does the pandemic’s long-term impact concern you?

Brace: I don’t have any fear about that, largely because people always need a place to live… At the end of the day, there’s always going to be demand for rentals. That’s why I personally will invest in rentals myself.

Tauscher: I feel the same way. I think that as long as people are home and they’re bored and they can only do so much to the current home, they’re now talking more than ever about “Maybe we should do this. Maybe we should do that.” And so it doesn’t scare me because I’m seeing so much more activity out of the people that I talked with on a daily basis.

I spoke with one of my investors yesterday who owns a small Chinese food restaurant. He said he made that conversion very quickly to get the food out in a different way and he was terrified that first couple of weeks, but he said I’ve had more banner days in the last two months than he had in the last 10 years of being in business.

For more information on Mary Nollenberger, please check out her full bio on our website HERE.